The homelessness among young people is first of all an alarming phenomenon[1].

As a social problem, the homelessness itself, most frequently perceived as a problem affecting people around 50 year of age; the males more often than females. When the problem in question is considered in the context of children, it meets not only with the barrier connected with acceptance of possibility of existence of such a phenomenon, but also with barrier of reliability of data concerning the scale and range of such a homelessness. The aim of this study is to present the figures confirming the existence and to show the scale of the phenomenon of homelessness of children and teenagers in Poland on the basis of the results of National Census of Population and Housing conducted in 2011.[2].

This article was written as part of an international research project entitled: “A Study Relating to Children Rough Sleepers who are Runaways & Homeless and Victims of Sexual Exploitation/Abuse & other Violence on the Streets and Development of Knowledge Transfer Activities that Improve Services & Policies to Support & Protect these Vulnerable Children” carried out by the “Centre for Education and Enterprise Support” in Rzeszów, together with partners from nine European countries within the framework of the Daphne III Program under the supervision on University of Wolverhampton (United Kingdom).

The Main Statistical Office, on the basis of Censuses of Population realized cyclically, makes available to the public the data that enables getting to know in detail the phenomenon of homelessness, including the homelessness affecting children and youngsters. The results of National Census show, that number of homeless people equaled 25 773 of people[3]. 9 789 of people were numbered among so called 1st category of homeless, whereas 15 984 among the 2nd category of homeless[4]. The presented data have been worked out in various sections, what allows for comparison of some aspects of homelessness affecting children. Also useful in the tables in question are the results of the Census conducted in 2002. According to the number of people taking advantage of hostels and night shelters, there were 11 851 of homeless staying in those institutions, from among 630 of individuals constituted children and youngsters up to 19 year of age[5]. Among the people belonging to the 1st category of homeless, there were 150 individuals in the group of children and teenagers (1,53% of the general number of homeless), of which 80 people constituted males and 70 people – females. It is worth noticing, that despite the comparable number of homeless up to 19 years of age, children and teenagers of male sex constituted, in general, 0,96% of the whole population of homeless males, but young women up to 19 years of age constituted as many as 4,55% of the whole population of homeless women (Table 1).

Among those 150 people under 19 years of age, 7 constitued the individuals, that were homeless up to 3 months inclusive, 20 of them were homeless up to one year, 34 persons were affected by this problem in the period from 2 to 3 years, 46 remained homeless up to 8 years, 12 people dealt with homelessness longer than 8 years, while in the case of 31 people it was impossible to determine the length of homelessness. The detailed data are presented in Chart 1.

Chart 1. The number of children and teenagers up to 19 years of age on account of the length of homelessness in 2011. 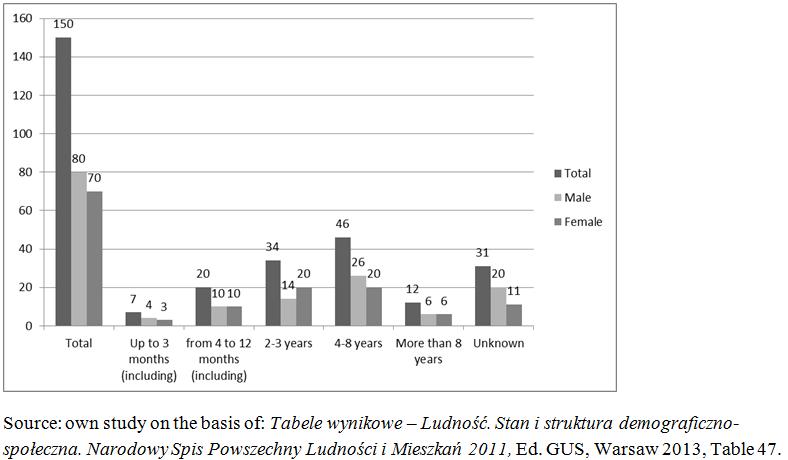 It is worth noticing, that the number of children remaining homeless is increasing along with the increase of number of years when they have no home. This situation is factual when it comes to the homelessness lasting up to 8 years. In the case of children and teenagers remaining homeless over 8 years, their number decreases by 2/3 in relation to the previous group ( the children remaining homeless from 4 to 8 years ). The explanation to this phenomenon cane be the comment included in the initial report prepared after the Census, which states, that: “the number of listed children up to the 17 years of age clearly indicates, that number of homeless families is increasing”[6].
The results of Census provide also the fragmentary pieces of information concerning the spatial diversity of homeless people. However, due to the acceptance of different order of group ages it is hard to explicitly draw the conclusions concerning number of homeless children and teenagers. The data in the order of provinces presents in the reference tables in question refer to age group 0 – 29, so they contain not only the category of people up to 19 years of age, but also the adults. Due to the cognitive value, those data are presented in the Table 2.

Table 2. Number of homeless children of the 1st category according to the provinces and genders respecting general number of people in 2011.

[1] For purposes of this article, it was assumed, that the notion “child” will mean underage people, applying them interchangeable with names “children and youth” and (if necessary) “children under 19 years old” in the further part of the text. The last notion results from the assumptions made from the public statistics, presenting results of polls in this age system.

[4] The first category of homeless people includes people living on the street, in the public space without shelter, that could be recognized as a lodging. To this category belongs, first of all, people that spends evening and night in critical moment of recording, outside any institution, that functions all day long. The second category of homeless people are people without the permanent place of living, that often moves between different types of objects of collective accommodations (shelters, doss-houses and institutions for homeless people). Compare Narodowy Spis Powszechny Ludności i Mieszkań 2011, Publishing House GUS, Warsaw 2012, p. 90.

[5] Due to quite precise data in this depiction, it was possible to separate age sub-groups: 0-4 years – 211 children; 5-9 years – 118 children; 10-14 years – 132 children; 15-19 years – 169 young people. In the list from 2002 it was respectively: 574 children; 337 children; 231 children and 284 young people (together 1426 people). So there has been a clear decrease in the number of children and youth staying in shelters for homeless and in doss-houses. But the census data don’t show if the decrease was connected with the growth of so-called homefullness, or it was an effect of ‘moving away’ of homeless people from institutional support. Compare Tabele przeglądowe – Ludność. Stan i struktura demograficzno-społeczna. Narodowy Spis Powszechny Ludności i Mieszkań 2011, Publishing House GUS, Warsaw 2013, Table XX.