Analysis of the fundamental values of descriptive statistics for the data showed that the average monthly income earned by female entrepreneurs amounted to 5242 zł, and was about 2324 zł higher than income of women not engaged in economic activity. Woman who aren’t entrepreneurs gained average income of 2919 zł. The median, which divides the value of the entire population of students in two equal parts, amounted to: 4500 zł for women engaged in economic activities and 2500 zł for women not engaged in it. Minimum income women entrepreneurs were about 500 zł higher income women not involved in entrepreneurship – 1500 zł. The difference between the maximum values of income was as high as 5000 zł.

Women conducting business achieved an average income in the period in the amount of 12000 zł, while women not conducting business – only 7000 zł. Analysing of diversity of income, should pay attention to the value of the coefficient of variation, which is statistically significant in both cases, however, higher in the women engaged in an economic activity, which indicates greater internal diversity of income in the group. This is also confirmed kurtosis, which is lower in this particular group, and suggests a more flattened distribution of the indicated value.

Also the evaluation of the usefulness of income showed significant differences in both groups (Figure 1).

Figure 1. Assessment of general income women engaged and not engaged in economic activity and living in rural areas. 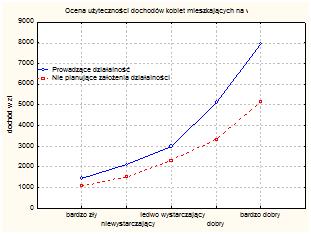 Figure 1 presents the levels of income and attributed them to assess the usefulness of the verbal scale. Women leading business need more income, even if judging it as “very bad.” With the increase of utility, increasing the value of income, but also the difference in their levels indicated by women conducting or not conducting business. The value of income assessed as “very good” amounted to 7943 zł in the group of women engaged in an activity, and 5172 zł in the group of women not engaged in business.

The presented findings are part of the dissemination activities and results of the project “BADGE: Business Advice and Guidance training for women Entrepreneurs“, funded by the European Commission under the Lifelong Learning Programme Lifelong implemented by Danmar Computers, together with partners from seven countries under the guidance of the Greek association “Family and Childcare Centre”. The aim of the project is the transfer and adaptation of innovative support program for women in difficult situations, who through training and workshops with soft skills and professional help to become independent and start their own company.

This project has been funded with support from the European Commission. This publication [communication] reflects the views only of the author, and the Commission cannot be held responsible for any use which may be made of the information contained therein.